You have probably never heard their names before. You might not be familiar with their news outlet, Khabar Lahariya, India’s only all-female news network. Yet the women we meet in Writing With Fire are some of the most inspiring and fearless reporters you will ever encounter. 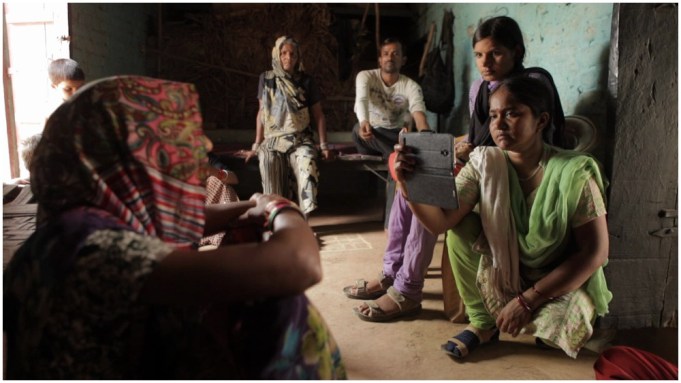 In their feature debut, directors Rintu Thomas and Sushmit Ghosh follow this ambitious group of Dalit wonder women—led by their chief reporter, Meera—as the team switches from print to digital in order to stay relevant. Armed with smartphones and the courage and conviction one must be born with, they investigate the incompetence of the local police force, listen to and stand by victims of caste and gender violence, and challenge long-standing, harmful practices that lead to injustice and intimidation. Thanks to the directors’ intimate yet respectful lens, we witness these rural reporters’ awe-inspiring efforts to dismantle patriarchy and redefine traditional notions of power. Writing With Fire is an electrifying reminder to never underestimate the strength of a woman who’s had enough.

To celebrate the release of the film on 1 August, we commissioned Mathy Selvakumaran to interview the film's directors Rintu Thomas and Sushmit Ghosh.

Mathy is an independent screenwriter, director, creative producer and activist, with a background in academia, marketing and film production. She understands the power of images and the importance of being able to see oneself in culture, and her background and upbringing fuels her desire to change culture and reframe narratives that are dominant in the media. Drawn to personal, character-driven narratives and impactful subjects that move the needle, she has a particular interest in works addressing disability rights activism, cross-cultural experiences (particularly from cultural backgrounds similar to her own) and living in the margins of already marginalised communities. Outside of film, she enjoys disability sports, arts and crafts, and travelling to far away places.

We hope you enjoy the interview...

All About Eve and Obsession